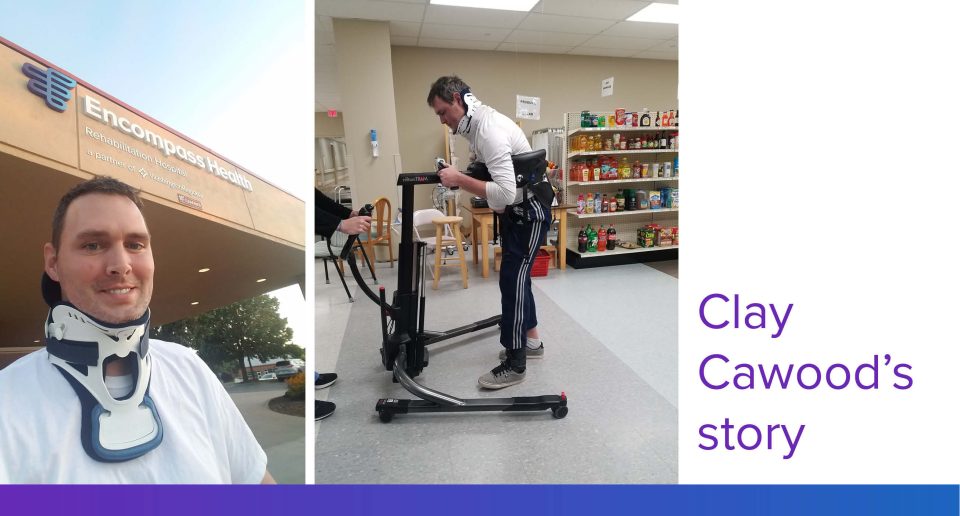 Clay Cawood wasn’t meant to be the target of an attack in November 2009. In what was ultimately a case of mistaken identity, the environmental engineer with Tyson Foods was beaten outside his Fayetteville, Arkansas, home by college students and left with injuries to his neck and back.

After staving off surgery with interventional treatment as long as he could, Cawood contracted meningitis in 2014 that led to a series of falls over the next several years. He agreed to undergo surgery in 2019, nearly a decade after his initial injuries.

The surgery didn’t go as planned, though, and after a difficult journey to regain his independence, Cawood took matters into his own hands and demanded inpatient rehabilitative care.

Taking control of his health

Cawood’s first surgery was meant to decompress his spine for a fusion, but complications resulted in his left leg being paralyzed. Cawood was sent home and directed to begin outpatient therapy to recover, but he quickly realized something wasn’t right.

After multiple falls, Cawood’s therapist recommended he pursue inpatient rehabilitation. Inspired by that guidance and frustrated by his continued falls, he climbed into his Jeep and drove directly to Encompass Health Rehabilitation Hospital of Fayetteville.

“I fell getting out of my Jeep in the parking lot,” Cawood said. “The hospital’s CEO was outside and helped me into a wheelchair and ended up showing me around the hospital. He told me he’d make sure everything was taken care of, and he got me in. I’ve been in a lot of hospitals over the years, and I’ve never had that kind of experience.”

To compensate for his lack of feeling in his left leg, Cawood’s therapy team gave him the option of using a wheelchair, or walking with a brace that allowed him to lock his leg—he chose walking.

“My therapist got multiple braces and tried them on me, and we finally found one that worked,” Cawood said. “It took off from there.”

Therapists worked with Cawood to strengthen his core and arms so he could support himself on a walker. Initially, he never imagined leaving Encompass Health Fayetteville in anything other than a wheelchair, especially not until he had revision surgery on his neck.

“They weren’t going to let that happen,” he said. “I’m only 35, and never expected to have something like this happen. When I’d get down on myself, they were so positive. The energy was incredible.”

Cawood returned to Encompass Health Fayetteville months later after a second surgery. Though he was unable to safely walk during this stay, his team worked within his limitations and helped regain as much as independence as was possible.

“It was truly impressive and inspiring to see their compassion and drive and motivation,” he said. “Not one person ever half-way did anything in my treatment.”

Speak up for your care

Though Cawood doesn’t necessarily recommend driving to a facility of your choice during a moment of frustration, he does advocate for taking control of your health when you realize something isn’t right.

Cawood is scheduled for a third and final surgery that should ultimately restore feeling to his left side, and he’s planning to once again return to Encompass Health Fayetteville to close the book on a decade-long story.

“If you feel like you need more than you’re getting—that there’s something else that can help you—speak up. But it may have been a little safer to call rather than jump in the car,” he laughed.