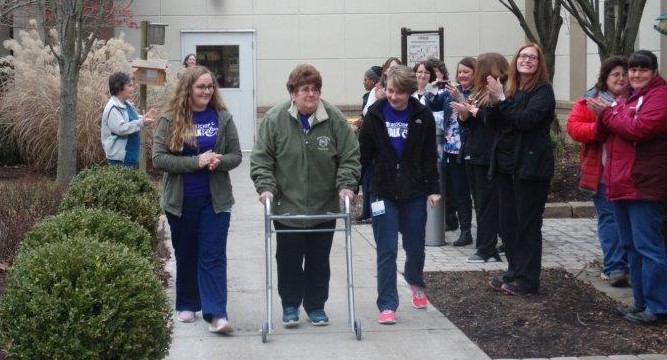 Betty Spencer’s family celebrated the moment she was able to move her pointer finger on her own.

The 77-year-old from Harvey’s Lake, Pennsylvania, had been admitted to Geisinger Encompass Health Rehabilitation Hospital unable to do anything on her own, not the energetic and vivacious woman she had always been.

With the help of Geisinger Encompass Health, though, Spencer’s small victories continued and turned into large ones as she was able to battle back from Guillain-Barré syndrome.

Just three weeks prior, Spencer was spending her days taking care of her home, playing with her grandchildren, volunteering at her church and doing anything that would keep her busy.

Then, one morning, she began feeling ill and weak. The illness was initially thought to be vertigo, then attributed to a urinary tract infection. But even with medication, she was not getting better. The weakness got worse and when Spencer lost function in her legs, she was taken to the emergency room.

At this point, Spencer’s health had quickly spiraled south. Not only had she lost function in her legs, but also her arms. In addition, she could not speak or swallow. Then, she started experiencing respiratory failure and she was placed on a ventilator.

“You don’t even know how hard it was to see her like that. We thought she was going to die there,” stated Belinda Yanchik, one of Spencer’s six children.

The doctors performed a spinal tap and confirmed by a fluid examination that Betty had Guillain-Barré syndrome, a rare disorder where the immune system attacks the peripheral nervous system causing a quick onset of muscle weakness and sometimes complete paralysis.

After four days in her local hospital, she was transferred to a hospital that offered the IVIG treatments she needed to help her combat the disease. She was there for 18 days. Thankfully, she responded to the treatments and was able to be removed from the ventilator and breathe on her own. However, her road to recovery had only just begun.

Her next step toward independence was rehabilitation, but Spencer’s family struggled to find an available rehabilitation bed close to their home and turned to Google for more options. That’s where her daughter found Geisinger Encompass Health, which was located about an hour from their home but treated patients with Guillain-Barré syndrome.

The family, many of which work in the healthcare industry, came to tour the hospital to see if it would meet their high expectations for taking care of Spencer.

“My sister-in-law was looking in the bathroom, looking in the closets, looking on the floor. Everything was immaculate. The gym was so well supplied with all types of equipment and the [activities of daily living suite] was perfect for her [occupational therapy]. This was the place we were bringing her. Yes, it was a little bit of a distance, but it was worth the drive for what she needed,” said Yanchik.

Lannan was “prepared for the worst,” she said, after hearing Spencer had limited function and required the use of a Hoyer Lift to get in and out of bed. She knew she would need full assistance with bathing and dressing; and with Spencer unable to sit up on her own, she would need to spend a lot of time working on rebuilding her core and upper body strength. Approximately two weeks into her stay, when she was able to walk with assistance, Lannan transitioned Spencer to dressing herself again and began working with her in the kitchen to help her practice one of her favorite daily activities – preparing a cup of coffee.

Koppenhaver reports that Spencer’s physical therapy focused on core strengthening, getting in and out of bed without the use of a lift and practicing walking on the parallel bars. Then, on Thanksgiving Day, Spencer, who had zero functional abilities just two weeks prior, took her first steps with a walker. A week later, she was walking “all over the place,” she said.

Lannan and Koppenhaver were not Spencer’s only angels supporting her through her recovery. Her family also took great care of her and never left her side. The day after her admission to Geisinger Encompass Health, coincidentally, was the 2019 GBS|CIDP Foundation International virtual walk and roll fundraising event, where individuals are requested to walk or roll one mile in their own location. The funds raised are used to support research of diagnosis and treatment of Guillain-Barré syndrome and Chronic Inflammatory Demyelinating Polyneuropathy.

Twenty-two people, including Spencer’s hospital roommate’s daughter, walked one mile around the hospital and nearby area wearing purple “Betty’s Bunch” T-shirts while, Spencer watched from the window. An additional 50 family members and friends also joined the walk virtually.

On Dec. 8 , 2019, the moment Spencer has been working hard for arrived. Despite being told it would be months or even years before she saw progress, Spencer reached her personal goal of walking out of the rehabilitation hospital and returning home. Her mind is now set on a new goal of eventually walking again without her walker, and there’s no doubt her angels will be right there by her side cheering her on.