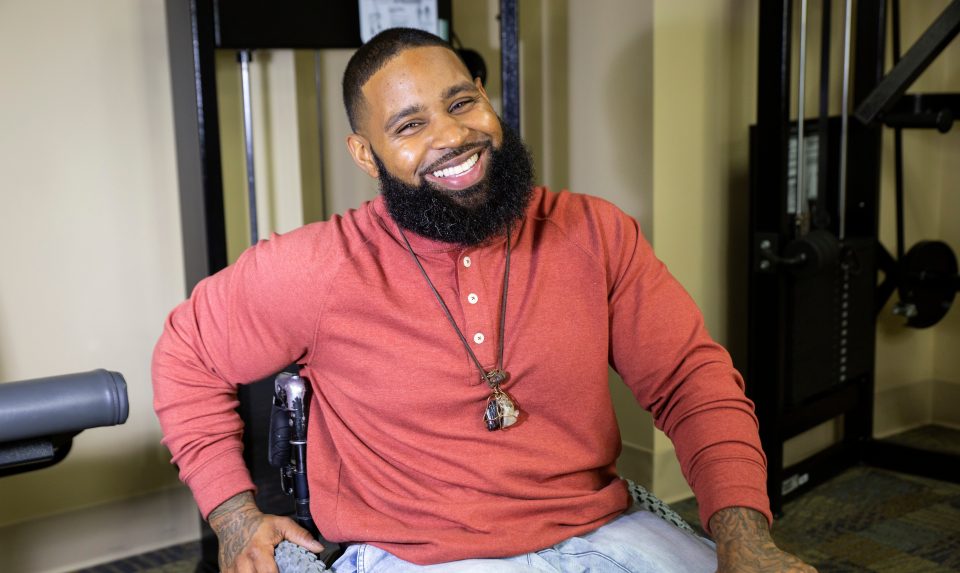 When you ask Wesley Hamilton about the best thing to ever happen to him, his answer might surprise you.

Wesley Hamilton rarely smiled before he was shot.

From Kansas City, Missouri, Hamilton ran with a rough crowd and looked at the world around him with a negative outlook that never faded. On Jan. 9, 2012, everything changed when Hamilton was shot in the abdomen and paralyzed from the waist down.

The years following the shooting not only saw Hamilton work through his journey of physical rehabilitation, but also a mental transformation that led him to start his own foundation, Disabled But Not Really.

His enthusiasm for life and helping others received national and international spotlight when Hamilton appeared as a hero on the Netflix hit “Queer Eye,” continuing to spark conversation and bring awareness to navigating life with a disability. His many successes as an advocate, though, are something he never would have imagined during his darkest hours.

After many weeks in the hospital, Hamilton was admitted to MidAmerica Rehabilitation Hospital, an affiliate of Encompass Health, for inpatient rehabilitation, working on mastering basic skills he would need to return home with a spinal cord injury, and to live as a single father in a wheelchair.

“When I came to MidAmerica, I wasn’t in a position where I loved who I was. I was battling demons,” he said. “I couldn’t understand how to live this life. There was no way I could be a single father in a wheelchair, or so I thought.”

The reality of his situation only intensified when he returned home. After receiving care on a continual basis during his time in the hospital, the quiet time spent alone at home came at as a stark contrast and depression sank in.

“I went into my old mindset, my old lifestyle,” he said. “I had suicidal thoughts; I went through the whole process.”

Pressure ulcers—one that became a stage three wound—and subsequent flap surgeries forced Hamilton onto bedrest for nearly two years. During that time, he returned to MidAmerica Rehabilitation Hospital for outpatient therapy to manage the pressure ulcer and other complications that came with them.

“They had seen everything—they’ve seen people overcome and battle defeat,” Hamilton said. “I was right in the middle of it.”

As his body began to heal, so did his mind.

“I was watching other people with disabilities, some more severe than mine, and they were happy,” Hamilton said. “So I thought, ‘Why am I not happy?’”

While on bedrest, Hamilton found a new focus on nutrition, losing 100 pounds. As his health began to improve, Hamilton’s passion for nutrition turned into a passion for fitness as well. Now, he regularly works with other spinal cord injury patients on adaptive fitness programs, and it’s also a pillar of his foundation.

“When I did something I couldn’t even do while I was walking, it made me realize I could do anything,” he said.

Hamilton harnessed that newfound positivity and has held onto it ever since. Looking to inspire others, much as the team at Encompass Health inspired him, Hamilton started his foundation, Disabled But Not Really.

The foundation operates with the mission of instilling in those with disabilities, a physically limitless mindset that breeds courage, confidence and competence. Its core beliefs are rooted in promoting fitness, providing the opportunity to become productive and self-serving while gaining the knowledge necessary for living a nutritional lifestyle.

“I’m living my purpose,” Hamilton said. “We all have the choice to do something. I’m meant to do the things I’m doing—showing others they can get up and do more.”

Focusing on the future with the Fab Five

A reboot of Bravo’s “Queer Eye for the Straight Guy,” Netflix’s Emmy Award-winning “Queer Eye” sees the Fab Five—Antoni Porowski, Tan France, Karamo Brown, Bobby Berk and Jonathan Van Ness—take the subject of each episode through a life transformation, including a personal and home makeover.

“I use my voice pretty well; I speak about the difficulty of disabilities but also push independence and empowerment,” Hamilton said. “When I was approached, I was excited to have the opportunity to give the world a chance to see life from a different view, and change the perspective that a person with a disability isn’t able to do things.”

During the episode that was released as part of season 4 in August, the Fab Five visited Wesley to help him prepare for a fundraising event for Disabled But Not Really.

Since his injury, Hamilton avoided outerwear because it often interfered with his wheelchair or got dirty due to length. To help him present a more professional image for his foundation, Hamilton underwent a makeover that included custom tailored jackets more suitable for a wheelchair.

The show also spotlighted the struggles Hamilton had navigating his own home—a bathroom too small to turn in and a stove that required long spoons to turn off and on. By the end of the week, he received a complete renovation of his home to make it more accessible and comfortable.

“Even with resources, you might not be able to make that big change, like knocking down a wall,” Hamilton said. “I found a way to adapt with the things I had, but it made me more independent at home. It showed people who do home design what a home should look like that’s really comfortable for someone in my position.”

He also met his shooter for the first time since the altercation more than seven years ago, an encounter that allowed him to truly move forward into the future, he said on the show.

Disabled, but not really

Since his appearance on the show, Disabled But Not Really has continued to grow and has received support from far and wide.

“We’ve got love all around the world now,” Hamilton said.

Currently, Hamilton’s foundation is working on several projects in the Kansas City area. Building on his passion for fitness, Hamilton and the foundation are bringing inclusive fitness centers and parks to underserved communities. The foundation is also advising companies on ways to make their businesses and environments more disability friendly.

“Every day I wake up, I’m trying to create change,” he said. “If we wait on someone else, it’s never going to happen.”