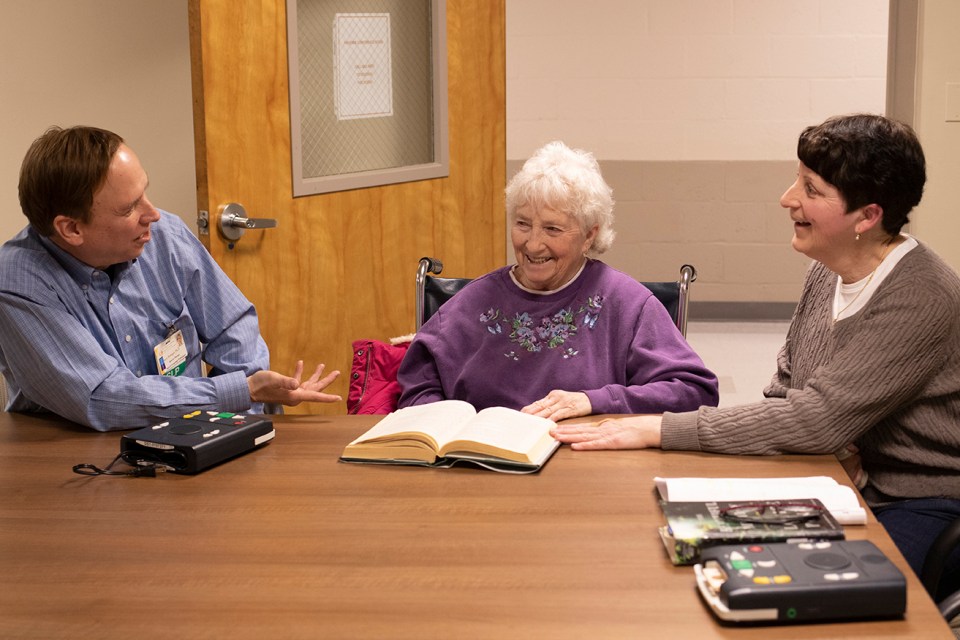 A book club at New England Rehabilitation Hospital of Portland allows patients with aphasia to read in a new way.

In the ever-evolving world of rehabilitation, advances in technology are continually changing the way we treat patients. Sometimes, though, the simplest of gadgets can make a great impact on a patient during their continued recovery.

Twice a month, former patients of New England Rehabilitation Hospital of Portland, Maine, attend a book club facilitated by Dr. Steve Belanger, speech-language pathologist, and Katherine Kroll, recreational therapist. Attendees bring with them the current book and any notes they have taken on the previous week’s reading.

Complete with snacks and multiple digressions to other topics throughout the meeting, the book club operates like any other, and in most regards, it is. There is only one small difference—the attending patients all have aphasia.

“Typically, people with aphasia do not fully recover the ability to read, so they cannot read a traditional book, newspaper or magazine,” Dr. Belanger said. “Reading is a big thing for most people, and to lose it is a great loss. To bring that back to some degree is invaluable.”

Making the most of technology

Almost all attendees rely on audio recorders to listen to the books—a simple black machine with a handful of buttons to play, pause, adjust volume, locate chapter beginnings and slow the audio. They offer a wider range of playback speeds than the typical tablets or other resources, allowing the club members to choose a speed that best works for them.

The recorders are available to the patients at no charge through the state’s Department of Blind Services, and play recordings of the books from cartridges. Large print books come from the local library so attendees will have the physical book as well.

The book club typically reads non-fiction works, and many of today’s most popular authors, including Jodi Picoult and John Gresham.

Easing the effects of social isolation

Dr. Belanger began the program in 2004, not as a form of speech therapy, but rather as a way to combat the intense social isolation that can come with aphasia. While it may have a beneficial impact on the language abilities of the attendees, its primary focus is to help patients find ways to plug back into the community.

The club stays small so each attendee can actively participate.

“It’s not meant to be an active therapy, per say, but a change in quality of life by giving them the ability to read again,” Dr. Belanger said. “Social isolation is a big thing when you become aphasic and your ability to speak and communicate is impaired. It has implications on your health as well. To keep these people involved in the community when their communication is so limited is very important.”

Reading was a major part of Tina Callahan’s life pre-stroke as a fourth and fifth grade teacher. A member of the book club since it began, Tina has relied on the audio recorder to return to reading, and has been able to steadily increase the speed at which she listens to the books.