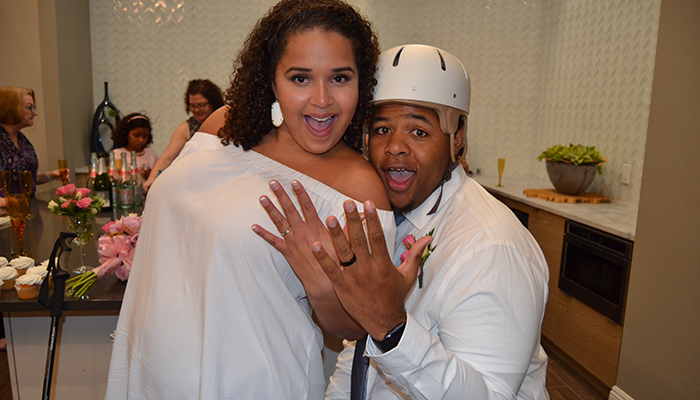 The 26-year-old worked a 9-5 job, and once he was home, he worked on his own marketing business where he designed websites and logos for clients. Nakumbe never slowed down, until while on a business trip hundreds of miles from home, he had a stroke.

Throughout his recovery, Nakumbe’s then-girlfriend Taylor stayed by his side and their love grew stronger, leading them both to realize there was no time like the present to make their love official.

Surviving a stroke hundreds of miles from home

Miles away from his home in Minnesota, Nakumbe was on a business trip in Ohio when he realized something wasn’t right.

“Sahmad woke up that morning and his arm was tingling, he thought he had slept on it funny,” explained Taylor, who was at home in Minnesota when the incident occurred.

Nakumbe stepped out because he wasn’t feeling well, and when his coworkers came to check on him, they found that he was unable to speak and couldn’t remember his password to access his phone.

Due to swelling in his brain, Nakumbe ‘s doctors had to perform a craniectomy, where his bone flap was removed.

Following his surgery and recovery, Nakumbe was transferred to Mount Carmel Rehabilitation Hospital, in partnership with Encompass Health, to begin his six-week journey to recovery.

One of Nakumbe’s most important goals was gaining back his ability to communicate. Nakumbe’s diagnosis of aphasia, the loss of ability to understand or express speech following brain damage, was a challenge that Nicole Link, speech language pathologist, was tasked with helping him overcome.

“Aphasia affects about 2 million Americans. When Sahmad entered rehabilitation, he had aphasia and he was unable to communicate his name,” Link said. “Through intensive speech therapy, profound motivation, self-efficacy, positivity and tremendous support from his unwavering significant other, Taylor, Sahmad left our hospital able to communicate his basic wants and needs, but more importantly, his love for Taylor. He is the reason we come to work every day. To help people when they are vulnerable and experiencing the most challenging of situations, and we can help them flourish.”

Through the entire stay, Nakumbe’s positivity was unwavering.

“He loved talking with Nicole, he worked on the alphabet and simple songs. On his first day of speech therapy, he was singing Michael Jackson’s ‘Thriller’,” Taylor said laughing. “Michael Jackson was his favorite and he knew every word! He couldn’t talk, but he knew every part of ‘Thriller’.”

While there were moments of levity, Taylor recounted that there were incredibly hard moments as well. After Nakumbe’s family returned home and it was just he and Taylor, the loneliness crept in.

“I remember the first few nights I was alone in a hotel just down the road. I was stressed and wanted to know he was okay,” Taylor recalled. “The staff assured me that I was welcome at any time and they made me feel welcome. I was stressed and scared, but they eased my anxiety and let me see him whenever I was scared. Everyone at the hospital was so caring and loving, they just wanted the best for us.”

Despite suffering a traumatic stroke at a young age, nothing stopped Nakumbe and his electric personality.

“After the stroke, doctors said he might not remember us, think or walk again. He had tubes down his throat when we first saw him,” Taylor said. “But when Sahmad began rehabilitation at Mount Carmel, everyone was impressed with his progress. And he maintained his personality through his facial expressions, and everyone loved him. He inspired everyone. He was 100 percent there in his brain, he just couldn’t communicate with his words.”

In the face of their overwhelming challenges, Nakumbe and Taylor have grown stronger together throughout the experience.

“I feel like God is teaching him to relax and be patient,” Taylor said. “He was always on the go, but this has taught us both how to slow down. It’s so scary to suffer a life-changing, traumatic event at a young age. But I feel like it’s taught us so much about each other.”

“I knew right away that he was the one,” Taylor said. “We agreed on everything and the more I got to know him, I knew that God had sent me him at the perfect time. I was very particular about what I wanted in a husband, and Sahmad met every criteria I had.”

Stories like Taylor and Sahmad’s are why the staff of Mount Carmel Rehabilitation Hospital come to work each day, said Kirstie Hamer, Nakumbe’s occupational therapist.

“Sahmad’s motivation and drive, in combination with our team’s expertise in neurorehabilitation, resulted in him walking out of our hospital safely and more able to fully live his life,” she said. “We are so proud of Sahmad and his continued success.”