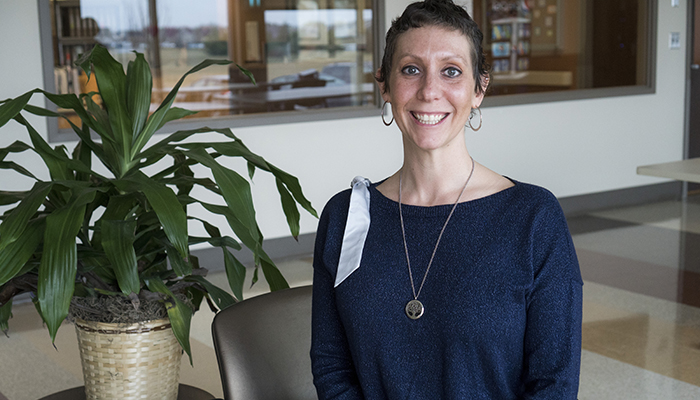 Jen Muzzi is an example of the value “focus on the positive” as she fights breast cancer.

When Jen Muzzi turned 40, she seemed to be the picture of health.

The Encompass Health Rehabilitation Hospital of Middletown dietitian has always prided herself on eating a healthy, balanced diet, and she had recently completed her strenuous yearlong yoga teaching certification.

It came as a complete shock when a routine mammogram ended up being far from normal. Despite her healthy lifestyle and no family history, Jen had stage 2 breast cancer.

“I had no symptoms and no family history,” she said. “It was a total shock.”

Jen had five abnormal growths in her right breast and would need several rounds of chemotherapy and eventually a right mastectomy.

Instead of suffering in silence, though, Jen started talking.

First, she and her husband talked with their 9-year-old daughter. They wanted to let her know that even though mom was sick, she was going to get better.

Then Jen started sharing her story with anyone who would listen. She found staying positive and talking it out was as healing as the medications she was taking to defeat the disease.

“Some are ashamed to deal with it, but for me, I needed to let it out,” she said. “It really helped me to talk about it. I did a lot of Facebook Live talking about my issues, like when I cut off my hair.”

The hair was a difficult part for Jen, who’s always had long, curly locks, but she found her support in family, friends and co-workers. A fellow Encompass Health Middletown employee even offered to hack her hair with Jen, but Jen refused the offer. “There’s no reason both of us should lose our hair,” she said.

Instead, her co-workers rallied to support Jen, creating T-shirts and donating their PTO for the almost two months Jen would be in and out of work at the Middletown, Delaware hospital.

Jen also looked to what she knew best to help her heal – food. Now a per diem dietitian, she started her career in Charleston, South Carolina working in some of the Holy City’s most famed restaurants, such as Slightly North of Broad and Charleston Grill.

When her husband’s military job moved them to Connecticut, Jen went back to school to become a dietitian. That education combined with her culinary school degree equipped her with the knowledge she needed to fuel her body as it fought the cancer.

She concocted healthy, yet flavorful smoothies, packed with nutrients and vitamins, and she continued to practice her yoga.

“I fully believe my diet and supplements and doing yoga really helped with my success,” Jen said. “I also journaled every day. When I was diagnosed, I never really felt the threat of death. I had hope and faith and knew I could use it for some sort of good.”

In October 2017, a little more than a year since her diagnosis, Jen was declared cancer free. She had a party – a “perky party,” she dubbed it – to celebrate the occasion, and of course, her silver lining to battling breast cancer.

“I have great new boobs,” she laughed. “There was no reason not to have fun with it. I even made a hashtag – #perkyforlife.”

She also continues to share her story, and when appropriate, she shares her secrets for success with her patients at Encompass Health Middletown.

“I tell them to eat well and take their supplements,” she said. “As a dietitian, I can tell them it worked for me.”